When an audio specialist works with an architect you get...

In many designed environments requiring amplified sound, the audio requirements are not greatly considered at the primary design stage. Quite often the audio arrives at the end, almost as an afterthought. The final result can be a disappointment sonically, and out of context architecturally. This gets worse when the design of the building causes the acoustics to work against the sound system.

In the case of the Kilsyth South Baptist Church in Australia, with the construction of their new Church auditorium, the Church building committee took some time to visit a number of Church's in the area who had recently undertaken building projects and was able to receive some helpful frank and honest advice on what worked and what had been an issue for these other Churches. The topic of audio system selection and acoustics often came up in conversations, so not surprisingly quality full range audio was identified at the outset as a high priority for Kilsyth. In addition to the Church's traditional morning services where intelligibility for spoken word was essential, the evening services with the Church's youth music ministry team required an audio system that was capable of articulately reproducing live band and electronic music at a reasonably high SPL

The building architect was briefed and took care with the auditorium design and early in the process engaged an audio/video integration consultant to supply a design for a complete A/V system within a general budget. The quotation presented by the consultant included a small, mid level line array PA system.

Kilsyth Baptist is also fortunate to have a Church member who is an audio engineer and owner of a well-respected audio production company specialising in live sound.

A full sound for a full bandFour HPI 110 and four HPI 18LP cover clearly the back wall with full range sound.

Whilst small line array sound systems have become a fashionable choice amongst growing suburban Churches and the consultants proposal was not surprising or an unusual recommendation, however the Church's audio engineer has a line array system as part of his production inventory, and based on his personal experience felt that a line array would not be the ideal solution for the space. And here the story really begins ...

Having heard the Quest HPI-110 system in another nearby Church (of similar physical proportions) he was extremely impressed with the system's uniform coverage, intelligibility, pristine sound and very small visual footprint. Costing much less than the proposed line array system, the HPI110 had a number of other compelling practical benefits.

A natural sound for acoustic instruments 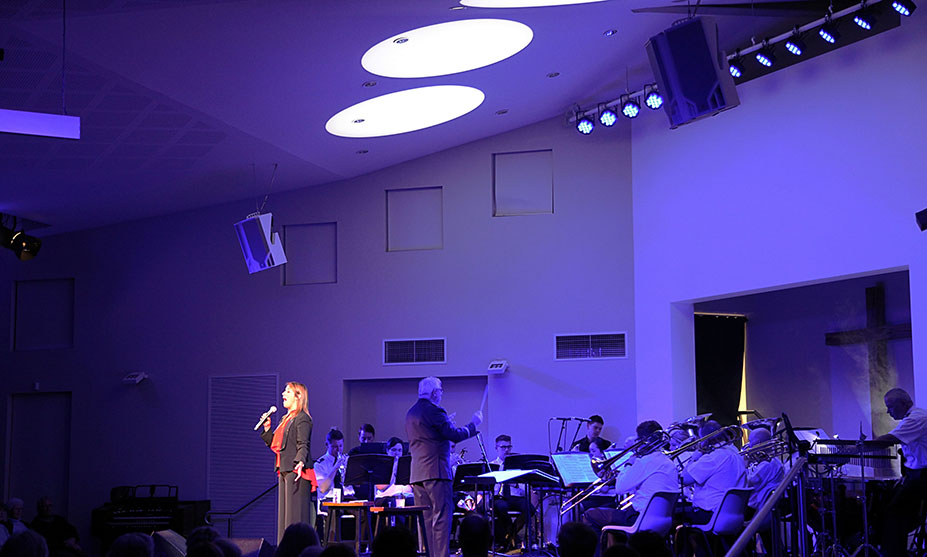 Plenty of power and coverage for a full production

He decided to take it to next level, researching and putting together an option for a system based around the Quest HPI-110 and HPI18LP cabinets. He commented  "What became immediately apparent is that the Quest HPI-110 was been designed as the practical audio solution for Churches and other problematic reverberant environments and it's not hard to see why it has become so popular with designers and contractors who are thinking outside the square."

Cutting to the chase ... He concluded the performance characteristics of a line array for the auditorium were far from ideal and would end up an expensive compromise, convinced he had a much better and more affordable solution he submitted his quotation for a Quest HPI system.  After careful consideration the quote was approved by the building project committee and the system ordered.  Needless to say, the first test session of the newly installed system was a moment of tense expectation.

So did it work? It certainly did. Four HPI-110 in two arrays and four Quest HPI18LP sub bass covers the 450 seat church with both uniform full range coverage and highly articulate voice. Room reflections are minimum and room slapback on the stage area is virtually non-existent.
A multi send monitor system of Quest HPI-10DC foldback monitors complements the system and all powered by Quest QA series amplifiers.

A quote received in a letter from one of the Church Deacons who was present for the initial test, "...the sound is pretty powerful and impressive. Certainly the youth will be impressed." 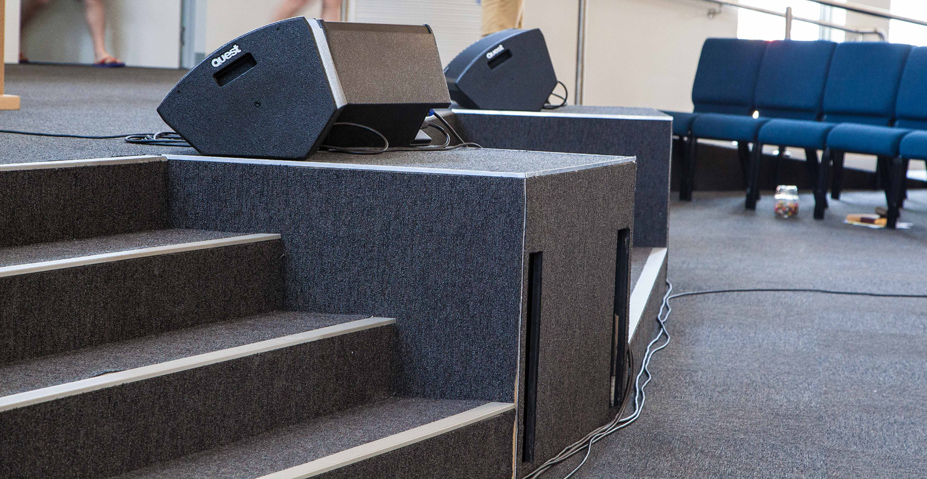 Four HPI18LP Sub bass are built into the stage.